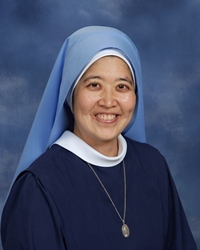 Sister Maria Inviolata is a member of the Sisters of Our Mother of Divine Grace. Assigned by Bishop Joseph Cistone, DD as the Pastoral Administrator of Ave Maria Parish, she resides with her community in Port Sanilac, at St. Mary's convent. Check back weekly for updates and current happenings at our Parish.

Next weekend, we’re celebrating Fourth of July weekend. There are few topics more misunderstood, espe- cially in America, than freedom. Many people think that if I can do whatever I want, then I’m free. Although there’s an element of truth to that, true freedom is very different. For example, you drive on the left side of the road, and I drive on the right side of the road, and there are no traffic signs or stop lights. That’s not freedom; that’s lawlessness. Or, I can sit at a piano and hit whatever keys I want. But when a trained musician sits behind a piano, he doesn’t do that without some consid- eration for the basic principles of music. Is the musician a slave? God and the Church are often seen as the enemies of freedom and happiness. God, all the laws, the rules, the commandments do not make us all miserable slaves. The reality is that God loves us and created us to be happy. He doesn’t want us to be slaves, but rather to be truly free, not to settle for pursuing a false freedom that’s actually slavery in disguise. St. Paul says that Christ set us free simply so that we could be free. There is a connection between freedom and the law.

Freedom and law can seem like opposites. But most of us don’t have a good understanding of what the law is actually trying to do. We probably learned the Ten Commandments when we were kids, as a list to memo- rize. Remember that phrase, “Thou shall not?” “Don’t” is an incomplete picture of what the law is, where it’s leading us to, and most importantly, who is giving it to us. Just like the laws of traffic or the principles of music, the law is attempting to lead us somewhere. But we often hear “don’t” without ever hearing its purpose. There’s a crucial line that we often forget. The First Commandment doesn’t actually begin with a don’t, but with: “I am the Lord your God, who brought you out of the land of Egypt, from the place of slavery.” God gave these laws to a people He had just rescued from over 400 years of slavery. God, who desires us to be happy and free, gave us those laws to show us the path to true freedom.

If I don’t believe that, then I’ll never be satisfied but question whatever I’m presented with. However, if I do be- lieve that there’s a God who truly desires my freedom, whose law shows me what the truly free and happy life looks like, then I’ll do whatever it takes because that’s what I was created for. Freedom is much more than doing whatever I want. Freedom is living the way I was created to live in an enduring peace that is found only in loving communion with Jesus. As we celebrate freedom in our country next weekend, let’s live for the freedom that God created us to experience. (hprweb.com)